I believe that eating sugar raises serotonin in the brain, and that most sugarholics are actually self-medicating their depression.  The Drs Wurtman found that high insulin allows the amino acid tryptophan, which is the precursor molecule of serotonin, to cross the blood-brain barrier.  However, the price is terrible.

Dr John Yudkin found that heart attack victims and people with atherosclerosis in hospital ate far more sugar than a control group of healthy hospital workers (left).  Another study found a very strong correlation between heart deaths and sugar consumption in 30 countries which was considerably stronger than that with cholesterol (right): 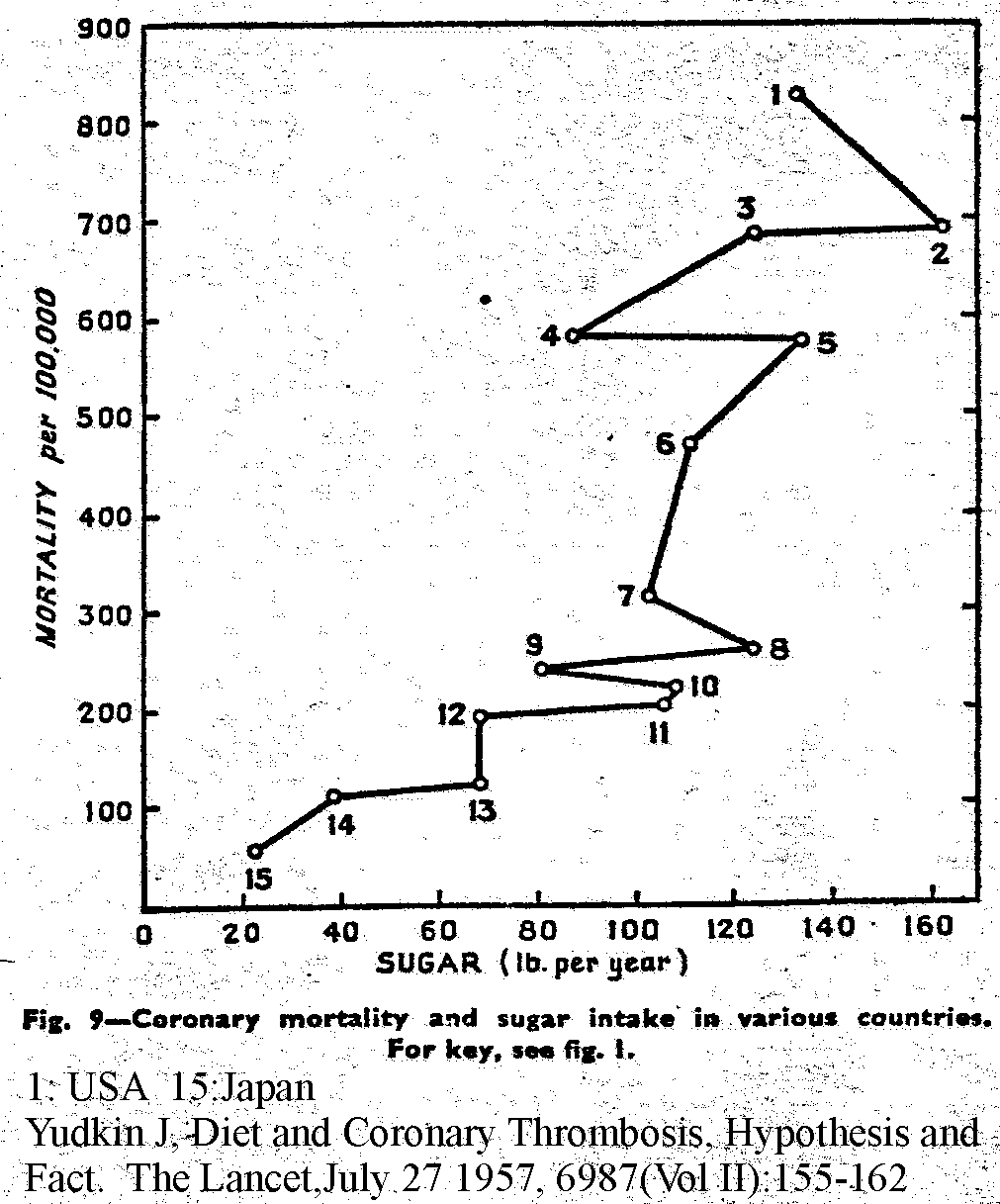 How much sugar is safe?  The sugar people suggest 25% is just fine, the health authorities suggest 10%, but the only study I’ve found on the subject suggests zero.  Cheraskin and Ringsdorf plotted refined carbohydrate consumption against the number of medical problems that people experienced:

The more refined foods, the greater the number of medical problems!  If one believes, as I do, that there is a causative relationship here, the implication is that there is no safe level of refined carbohydrate.

More recently, 75,521 nurses were studied for ten years.  Those who ate the highest glycemic load diets (meaning the most sugar and rapidly-absorbed carbohydrates like potatoes, white rice and white bread) suffered double the risk of developing coronary heart disease compared those who are the lowest glycemic load diets.  Significantly, the researchers concluded that:

… our findings suggest that a high intake of rapidly digested and absorbed carbohydrate increases the risk of independent of conventional coronary disease risk factors. These data add to the concern that the current low-fat, high-carbohydrate diet recommended in the may not be optimal for the prevention of and could actually increase the risk in individuals with high degrees of insulin resistance and glucose intolerance. (Am J Clin Nutr 6/2000;  71(6): 1455-61)

In a diet study, the group with the Awhite bread@ pattern of eating gained weight fastest, while the group which stuck to unrefined foods and avoided high GI foods maintained their weight.  (, Dietary patterns and changes in body mass index and waist circumference in adults. Am J Clin Nutr 2003; 77(6):1417‑25)

Among an Italian population, those who added sugar to their coffee had three times the risk of developing colorectal cancer.  Similarly, among 35,215 women in , those who ate the most sugar had twice the risk of colon cancer as those who at the least.

The glycemic load of diets has been found to be closely related to the incidence of chronic disease:

I have no doubt that high glycemic load diets elevate C-reactive protein and predispose to heart disease and cancer, and the fatter we are, the worse it gets:

Dietary glycemic load is significantly and positively associated with plasma hs-CRP in healthy middle-aged women, independent of conventional risk factors for ischemic heart disease. Exacerbation of the proinflammatory process may be a mechanism whereby a high intake of rapidly digested and absorbed carbohydrates increases the risk of ischemic heart disease, especially in overweight women prone to insulin resistance. (Am J Clin Nutr 3/2002; 75(3):492-8)

There is a huge body of research implicating sugar in disease, as I point out in my article Sugar.  Sugar rots the teeth, inflames the stomach lining and causes heartburn, myopia, diabetes, gall stones, heart disease and gout.  It is violently addictive, and carbohydrate cravings are as difficult to treat as the addiction to tobacco (unless you know the secret).  The secret, by the way, is that carbohydrate cravings fade quickly in most people when they adopt a low-carbohydrate diet.

Hypoglycemia is caused by sugar, and the remedy is to avoid sugar.  The terrible mood swings of hypoglycemia cause indescribable misery and are indistinguishable from neurosis, as I learned in my practice and wrote about in Hypoglycemia and Neurosis.  A 1975 article by Dr Fred Hofeldt in the Journal of the American Medical Association claims that hypoglycemia is vanishingly rare, but you can see that they’re just moving the goalposts because he didn’t actually test people with low blood sugar, he simply asserts they were asymptomatic (and in this article, the researchers don’t even know that the symptoms follow after the nadir of blood sugar, because glucose diffuses through the tissues to get to the neurons and it takes time for the neurons to feel the deficit).  Interestingly, a 2002 article on hypoglycemia found “increased beta-adrenergic sensitivity” in hypoglycemics, which is exactly what Dr Lawrence Resnick suggested occurs when simple carbohydrates disturb ion levels within the cells: “in pancreatic beta cells, other endocrine tissues, and sympathetic neurons, potentiated stimulus-secretion coupling resulting in hyperinsulinemia …”  In my opinion, articles which suggest hypoglycemia doesn’t exist and/or has nothing to do with sugar are simply “messages from our sponsor”, since I find more than a 20% incidence of hypoglycemia among the people who consult me for psychological problems.

By 1989, Dr Hofeldt had changed his tune to acknowledge that there is “a large patient group characterized as having idiopathic reactive hypoglycemia. … Patients with this meal-related eating disorder are characterized as ingesting excessive quantities of refined carbohydrate.”  In other words, he acknowledges the reality that eating too much sugar causes hypoglycemia, and lots of people have it!  Unfortunately, in the intervening 14 years between Hofledt’s studies, many thousands were undoubtedly told something like “It’s all in your head, hypoglycemia is quackery!”

Poor Dr Atkins!  His wife Veronica acknowledged after he died that "Robert did have some progression of his coronary artery disease in the last three years of his life including some new blockage of a secondary artery ... He did not have a heart attack." (Anthony Colpo)  He was so close to realizing that it’s the quality of the food that counts.  He’d realized everything else – especially that sugar damages the system and predisposes to the diseases we suffer.  But his thrust missed the mark, which is that without correcting the ionic imbalances within the cell, even avoiding carbohydrates isn’t enough; insulin resistance must be addressed.

Even Ancel Keys acknowledged the strong relationship between heart disease and sugar.

Men sometimes stumble over the truth, but often pick themselves up

and hurry off as though nothing had happened.

But he argued that the rise in occurred Atoo long@ after the rise in sugar consumption for it to be related.  He knew (or should have known) that the incubation time for sugar-dependent diseases such as Type II diabetes had been shown to be about twenty years by TL Cleave, who summarized his observations in The Saccharine Disease (Keats, New Canaan CT, 1975):

Twenty years after refined carbohydrates are adopted, there is dramatic rise in dental caries, obesity, diabetes and heart disease, as well as in the diseases associated with low fiber intake including diverticulitis, varicose veins and hemorrhoids.

How could sugar cause heart disease?   Sugar raises insulin considerably more than the foods it came from.  Since insulin acts as a growth factor for smooth muscle cells, this may account for the proliferation of smooth muscle cells found in plaque.  Vitamins and minerals are refined out of sugar although its metabolism requires and consumes them, which contributes to the deficiencies endemic in the population.  Low B vitamins both elevate homocysteine which damages the arterial wall, and lessens the ability of the body to repair the collagen of which it is composed.  Low magnesium is a factor in arterial spasm, which can cause heart attack.  The hyperglycemia which follows sugar consumption worsens with age, and encourages the reaction of sugars with proteins.  This “glycation” leads to the cross-linking of long-lived proteins in the body, visible in, for example, wrinkled skin, and which have been shown to cause the complications of diabetes.

Glucose and vitamin C have very similar structure and are both transported across the cell wall by insulin.  In the high blood sugar conditions of diabetes, vitamin C loses out in the competition with glucose for transport into the cell, meaning there’s a form of scurvy within diabetic cells.  Diabetics suffer atherosclerosis at about 8 times the rate of normal citizens, and suffer the complications of diabetes including blindness, kidney failure, and amputations.

Yet we regard sugar as benign!  There are people who claim with that sugar doesn’t contribute to obesity. In fact, in an experiment where the control group used artificial sweeteners, weight loss was 1.2kg, while the experimental group who ate sugar gained 1.6kg over the 10 weeks of the study.  Meanwhile, the chief medical officer of the American Diabetes Association claims sugar has nothing to do with diabetes, as thought there were no research to the contrary!  The actually endorses sugar as a food for diabetics on the grounds that glycosurea (sugar in the urine) is no worse when chocolate cake is substituted for a baked potato; but if there is glycosurea the diabetic is in poor control and at risk of complications.  Thus, the ADA position that “As sucrose does not increase glycemia to a greater extent than isocaloric amounts of starch, sucrose and sucrose-containing foods do not need to be restricted by people with diabetes” is both inexplicable and unsupportable, and, in my opinion, is clear evidence that the has sold itself out to its food-refiner contributors.  Incredibly, the USDA Diet Pyramid website links enquiries about sugar to a Center for Nutrition Policy and Promotion article which extols sugar as an essential nutrient and absolves it of all but causing cavities!  These guys rely on the credulity of the public.

Only two things are infinite, the universe and human stupidity, and I’m not sure about the universe

Maybe Einstein’s right – about these guys.  But we’ve been reassured all our lives that sugar is benign, so maybe it’s more a case of “garbage in, garbage out.”  In sharp contrast to this bullshit, a recent American Diabetes Association-supported study of a diet with only 20% carbohydrate calories clearly demonstrates that carbohydrate-restriction is effective in reducing risk of complications compared to a 55% carbohydrate diet:

Mean plasma glucose concentration before (s) and after (•) 5 weeks on the “Low-Biologically-Available-Glucose” diet.

It’s clear that the blood-sugar excursions after meals are not far from the normal, under-120mg/dl range, in sharp contrast to the standard low-fat diet meals where the blood sugar went beyond 250mg/dl.  The glycosylated hemoglobin score (HbA1c) was reduced from 9.8% (which portends a very high risk of complications) to within the normal range: the projected end-point was between 5.4% and 6.3%, while the reference range for non-diabetics is 4.6% to 6.4%.

In other words, this study shows that a low-carbohydrate diet normalizes mild type II diabetes, so there’s no reason that diabetics should die of complications, as, tragically, so many do who embrace the ruinous low-fat diet.